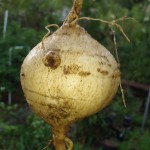 Originating in Central America, the Yam-Bean (Pachyrrhizus erosus) is a climbing perrenial plant of the legume family. The plant prefers warmer weather but will tolerate more temperate climates as far south as Sydney and Adelaide, temporarily dying back to its tubers over winter. Each plant can produce up to 5 root-swellings or tubers beneath the soil surface, each of which can get to the size of a turnip but having a similar crisp texture to water chestnuts and have an apple-like taste eaten raw. The tubers store well and dont lose their crispness through cooking, making them a great addition sliced into stirfries or grated raw into a salad. Yam Bean tubers are a delicacy in Mexico, eaten by the slice sprinkled with lemon-juice, salt, pepper and chillies. YUM!!! The vegetable has even been adopted by American supermarkets as a top-selling specialty item! 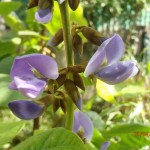 Yam Beans prefer light, well-drained, fertile soils and require a long growing season (~9 months) for the best tuber production. Tuber growth can also be enhanced by keeping vines cut short (to ~30cm) and pinching off flowers as they form. This way the plant puts all of its energy into the root system. Propagating Yam Beans is possible via tuber or by seed. The seed stores quite easily and remains viable for a number of years.

In addition to its tasty tubers, Yam Beans have a number of useful qualities making it a superb Permaculture crop: 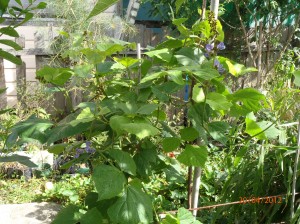 4 thoughts on “Yam Bean or Jicama â A tasty and versatile Permaculture crop.”